How Simple Dietary Changes Could Save $31 Trillion – and The Planet 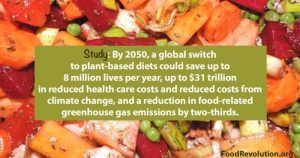 A Fascinating new article from foodrevolution.org, summarising key points from a new study by the US National Academy of Sciences last week, suggests that between now and 2050, a global switch to diets that rely far less on meat and far more on vegetables, fruits, and other plant foods could not only save up to 8 million lives per year, and reduce food-related greenhouse gas emissions by two-thirds; but would also save, in reduced health care costs and reduced costs from climate change, up to $31 trillion.

That would certainly solve the looming crisis in pensions and healthcare costs in the developed nations, happening as a result of people living longer and the percentage of population in the workforce paying taxes to support the rising costs.

The “Food Revolution.Org” article reported that: “Approximately half of the avoided deaths were due to a reduction in red meat consumption. While the other half were due to a combination of eating more fruits and vegetables, combined with a reduction in total calories, leading to fewer people being overweight or obese.

And the financial savings the researchers calculated were simply stunning. The models developed by this team of researchers found that changes in diet could lead to enormous savings both in healthcare and in reduced damage from climate change.”

You can read the Food Revolution article here,

and the paper  “Proceedings of the National Academy of Sciences” can be seen by clicking the link below:

PS, this is a one page abstract (Summary) reporting their main conclusions

This is a significant paper; confirming what “experts” and “messengers” have been saying for many years. It’s good to get a scientific study from such a credible source, supporting what has been widely believed but ignored by authorities for so long.

I suspect it will take some time for any serious action  to be taken. This may stay in the “too hard” basket for some time. There will be far too many vested interests putting road-blocks in it’s path.

But that doesn’t prevent you and I from passing on the message, and taking action in our own lives and encouraging our audiences from doing likewise.

Amazing Study: Mushrooms Reduce Breast Cancer by 64% Will You Need to Make Extra Money for Retirement?

Secret Ingredient For A Succesful And Happy Life

Why Most People Need Dietary Supplements